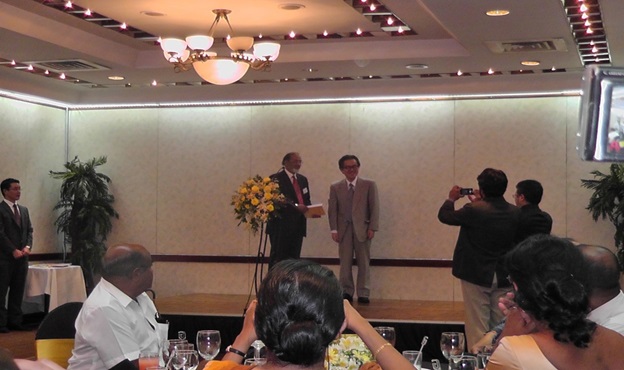 Prof. Ashok shared his views about Japan’s role in strengthening Science and Technology in South Asia. He discussed the possibility of promoting multilateral Science and Technology cooperation amongst South Asian Countries centered on Japan by a network of SAFJUAA members and their counter parts in Japan. He presented a comparison of joint research papers with Japan from India (9315), Nepal (394), Pakistan (632), and Sri Lanka (500). At the end he proposed that SAFJUAA members have experience of working both in their home countries and in Japan in all the three segments of Science and Technology. He stressed to map expertise amongst the members and their counterparts in Japan. This map can then be the basis for setting up a network.

Dr. Ramesh Parsad expressed his views regarding Japan’s emerging role in South Asia. He introduced the audience about population and life expectancy, population distribution, religious status, literacy rate and resources available in Nepal. Dr. Parsad mentioned successful Japanese projects, Tourism and hotel construction (Individual as Thangboche, Himalaya and many more), school infrastructure development activities, communication FM radio / Radio Nepal. At the end, he also updated about the Japanese investment in Nepal and suggested the following: Japan being a highly technical country can be helpful in development of human resource in various sectors in South Asian countries. Japanese investment in South Asian countries will be rewarding because people respect each other with friendly behavior. Japanese qualified individuals could be resource persons for bilateral relationship and Nepal’s development.

Prof. Dr. Khalid Rashid in his presentation “Japan’s emerging role in South Asia” presented the devastation in Japan as a consequence of WWII. He talked about the reforms and changes after WWII which made Japan’s rapid economic progress possible. He also deliberated upon Japan’s present position being 1st in the world in average life expectancy, 1st in the world passenger car production, second in the world GDP, second in the world in gross circulation of newspaper and 61st in land area. All this happened due to defensive security policy, non-aggression, non-nuclear and approach of non escalation of conflicts. He emphasized upon greater contribution of Japan in the fields of environment, stability and development in South Asia.

Prof. Karunaratne, presented his view point regarding Japan’s Emerging role in South Asia. He also presented SWOT analysis on South Asia. He also spoke about the reasons for relatively slow growth in 2012 due to climate change, energy related issues, micro economic imbalances, weak external demands and security uncertainty. He concluded his presentation that since Japan is one of the leading economics in the world, more closer ties with South Asian countries is expected in the areas of energy, services trade, technology transfer in agriculture, transportation and health care; investment in infrastructure, disaster management, and research & development.

The chair invited the members of the panel of discussion for their valuable input in response to the presentations made. The chief guest Mr. Daiji Sasai congratulated the organizers for a well planned event. He also appreciated the contributions made by the guest speakers and desired to strengthen the relationship among the people of South Asian region with Japan. At the end Dr. M Saman thanked the chief guest, speakers and participants.