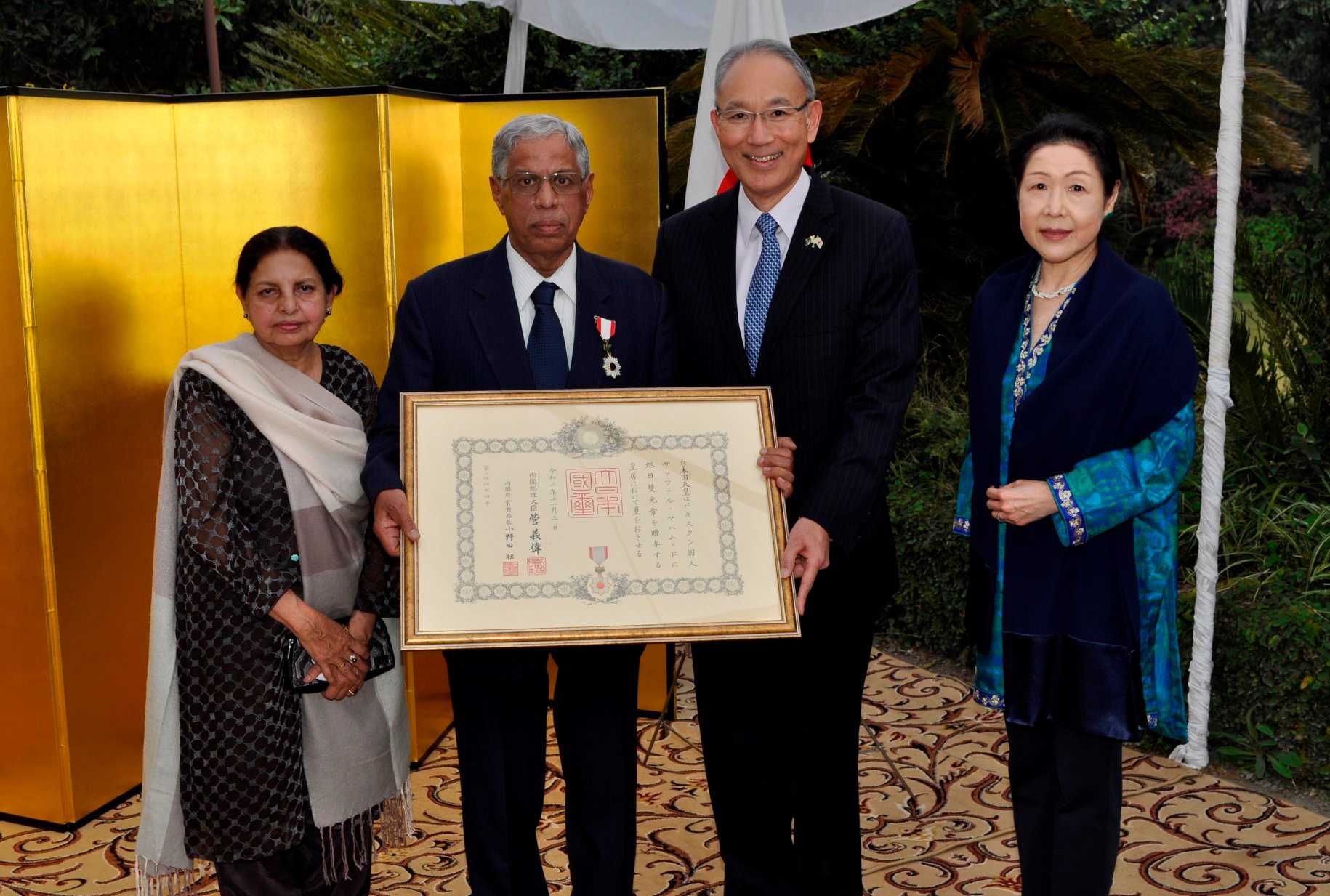 The Government of Japan has conferred the 2020 Autumn Imperial Decorations, “The Order of the Rising Sun, Gold and Silver Rays” upon Mr. Zafar Mahmood, visiting Professor at the Department of Japanese Language, National University of Modern Languages (NUML) Islamabad, in recognition of his significant contribution towards the promotion of Japanese language in Pakistan and strengthening friendly relations between Japan and Pakistan.

H.E. MATSUDA Kuninori, the Ambassador of Japan to Pakistan, on behalf of the Government of Japan, on February 9, conferred the imperial decoration “The Order of the Rising Sun, Gold and Silver Rays” upon Mr. Zafar Mahmood. The conferral ceremony was held at his official residence with limited participants of family and close friends of the decoration recipient, while taking infection prevention measures against COVID-19.

Mr. Zafar Mahmood’s ties with Japan began when he started his studies in the Nagoya University through a scholarship program offered by the Ministry of Education, Culture, Sports, Science and Technology (MEXT) of Japan in 1979. After graduation, he extended his stay for over 10 years working for NEC. In 2000, he joined the MEXT Alumni Association of Pakistan (MAAP) and has been working to promote educational exchanges between Japan and Pakistan. He also assisted the Embassy of Japan select talented Pakistani youth for future MEXT scholarship students and provided pre-departure sessions for the selected students.

He also contributed greatly to the promotion of the Japanese language in Pakistan. As a visiting professor, he taught in the Japanese Language Department of the National University of Modern Languages. His venture has now taken more popularity as he has begun conducting the Japanese Language Capability Test (JLCT) exam in different cities of Pakistan after becoming Pakistan’s only official agent in 2018. His relentless determination has already begun to bear fruits as the number of Japanese language learners in Pakistan is increasing with the passage of time.

Ambassador MATSUDA, while speaking on the occasion, congratulated Mr. Zafar on receiving this prestigious imperial decoration by the Government of Japan. He said language plays an important role in bridging the gap among the nations and the people while fostering mutual understanding of each other’s culture, values and traditions. “It is heartening to say that the Japanese language is becoming increasingly popular in Pakistan like Urdu is in Japan. Surely this would pave the way for further consolidating people-to-people interactions.”

While appreciating the dedicated efforts by Mr. Zafar, the Ambassador said that he has been doing a great job over the years by teaching Japanese language to Pakistani people as a visiting professor at the Japanese language department of NUML.

He expressed his sincere hope that this contribution will further promote and strengthen the cultural relations as well as people to people contacts between the two friendly nations.

While expressing his gratitude upon receiving Japanese Imperial decoration, Mr. Zafar Mahmood said “I pay my sincere gratitude to His Majesty the Emperor and the Government of Japan for honoring me with this prestigious award. I have a passion for teaching and transferring Japanese language skills to our younger generation”.

Maj. Gen (Retd) Muhammad Jaffar, Rector NUML, while appreciating the services of Mr. Zafar, congratulated him for receiving this award in recognition of his efforts for promoting the Japanese language in Pakistan from the platform of NUML.

The Government of Japan announced the recipients of the 2020 Autumn Imperial Decorations including Mr. Zafar Mahmood of MAAP