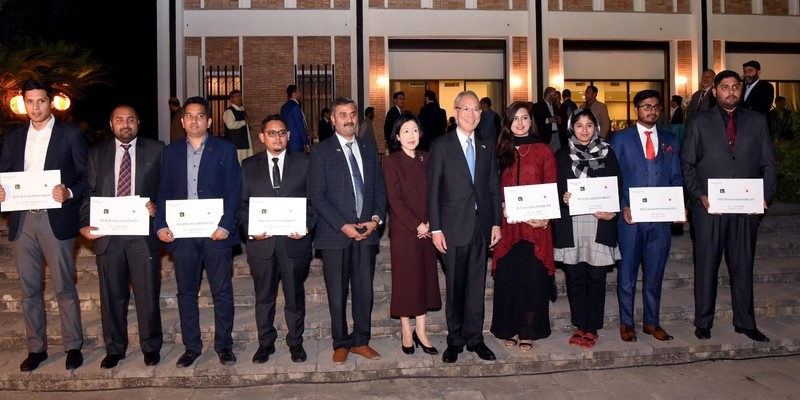 The Government of Japan has awarded MEXT (Ministry of Education, Culture, Sports, Science and Technology of Japan) Research Scholarships for Masters/Doctorate degrees for the year of 2019-2021 to ten (10) students of Pakistan aiming to provide them with an opportunity to pursue higher studies in their respective fields at the prominent universities in Japan.

The Embassy of Japan today organized a pre-departure orientation for the scholarship grantees who will shortly leave for Japan to undertake their higher studies. Pakistani alumni of the Japanese universities were also invited at the orientation who shared their knowledge and experience of studying and living in Japan with the young scholarship grantees.

H.E. Mr. Kuninori Matsuda, Ambassador of Japan to Pakistan, later in the evening hosted an annual reception at his residence in honor of the members of MEXT Alumni Association of Pakistan (MAAP) and also to bid farewell to the fresh scholarship grantees. The Ambassador congratulated the fresh scholarship recipients and expressed his hope that they would come back to Pakistan to utilize the knowledge and expertise acquired in Japan for future development of Pakistan. He hoped that these students would become bridges of friendship between Japan and Pakistan.

Ambassador Matsuda further said that fresh scholar grantees from Pakistan after arriving in Japan may face challenges and difficulties initially because of the language barrier as well as life style in Japan. However, he added, the friendship and hospitality of the Japanese people will help them to adjust with the Japanese life style. Ambassador also asked the fresh scholarship recipients to join hands with the MEXT Alumni Association of Pakistan (MAAP) upon their return to further promote the strong ties between the people of Japan and Pakistan.

The Government of Japan’s MEXT Research Scholarships was launched in 1954.

Since the first Pakistani student went to Japan on scholarship in 1963, up till now a large number of Pakistani students have successfully returned to Pakistan after obtaining their PhD/Master’s degrees in Japan. They are actively working in the academia, public and private sectors and have made significant contributions to the development of Pakistan in various fields as well as in strengthening friendly relationship between Japan and Pakistan. Japan awards graduate and post graduate fully funded scholarships to Pakistani students every year besides offering many short-term scholarships and training courses round the year. (End)