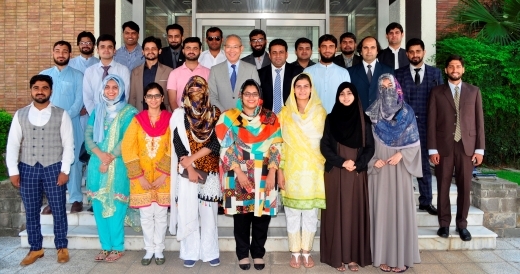 Thirty Pakistani students have got the MEXT Research Scholarships 2019 which are fully funded by the Government of Japan to study in various top-ranking Japanese universities to pursue their Masters and Doctorate degrees in their respective fields of study.

The Ministry of Education, Culture, Sports, Science and Technology (MEXT) of Japan annually offers scholarships to international students who wish to study in graduate courses at Japanese universities as research students. The students can apply for the MEXT Research scholarships every year either through the Embassy of Japan in their respective country or through direct correspondence with the relevant professor of the university in Japan. The currently selected Pakistani students directly applied to the universities in Japan and upon recommendation by their respective professors got selected for the prestigious MEXT scholarship.

The Embassy of Japan today held a pre-departure orientation session for the scholarship recipients where Dr. Yasar Ayaz, former MEXT scholar and head of Robotics department at NUST, briefed the students and shared his knowledge and experience of studying and living in Japan with the young scholarship awardees.

H.E. Mr. Kuninori Matsuda, Ambassador of Japan to Pakistan, while speaking on the occasion deeply congratulated the students upon their selection for the Japan’s prestigious MEXT research scholarship providing them an opportunity to study in the best Japanese universities. The Ambassador advised the scholarship recipients to focus on their studies while they are in Japan and give second priority to other attractions and temptations. “You better prepare and try to concentrate on your works and study first and enjoy second. This should be your motto” said the Ambassador. He further stressed that the students must get acquainted with the Japanese language, culture and life style for their comfortable stay and success while being in Japan.

Ambassador Matsuda informed the students that Japan and Pakistan are committed to each other to increase their economic relations and many Japanese companies have been invited to come and invest in Pakistan. Similarly Japan is ready to facilitate Pakistani companies to do their business in Japan and this would provide a job opportunity for the students in their specialized fields.

The Government of Japan’s MEXT Research Scholarships was launched in 1954. Since the first Pakistani student went to Japan on scholarship in 1963, up till now a large number of Pakistani students have successfully returned to Pakistan after obtaining their PhD/Master’s degrees in Japan. They are actively working in the academia, public and private sectors and have made significant contributions to the development of Pakistan in various fields as well as in strengthening friendly relationship between Japan and Pakistan. Japan awards graduate and post graduate fully funded scholarships to Pakistani students every year besides offering many short-term scholarships and training courses round the year. (End)